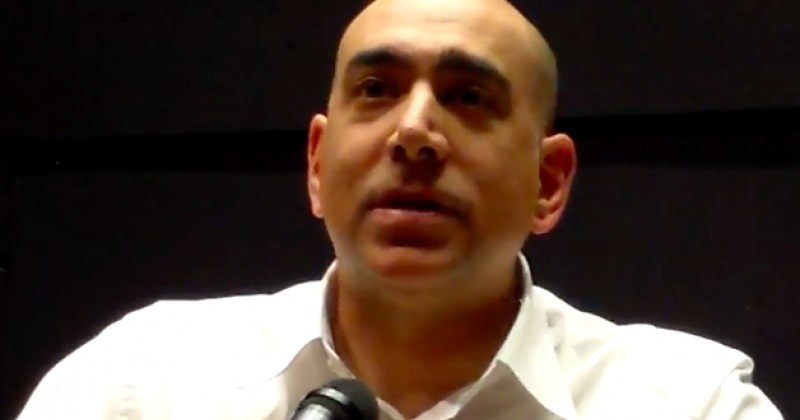 Ali Abu Nimah is a Palestinian-American journalist who has been described as the leading American proponent of a one-state solution to the Israeli–Palestinian conflict. A resident of Chicago who contributes regularly to such publications as the Chicago Tribune and the Los Angeles Times, he has also served as the Vice-President on the Board of Directors of the Arab American Action Network, is a fellow at the Palestine Center, and is a co-founder of The Electronic Intifada.

Ahmed Asks Ali about what he thinks about the newly released Human Rights Watch report. Ali welcomes the report. The basic raison d’etre of Israel is to have a Jewish majority in Israel, this began in 1947 and done through ethnic cleansing. After that it has maintained much more brutal control against Palestinians, furthermore not allowing Palestinians who fled the country to come back. The 200 pages of the report provides 200 pages of irrefutable evidence of this.

The Human rights watch as an institution is a mainstream institution which makes the report and therefore the case against Israel impactful. More and more institutions are starting to recognize Israel as an apartheid system. Human Rights Watch is an American Organization and the fear factor towards the Israeli lobby has decreased because it has become difficult to argue that Israel is not implementing a system of apartheid. The HRW report uncovers the so-called peace process and actually provides an allaby and hides the reality of the situation. Israel tries to promote the idea that the Palestinians and the Israelis are two equals and that all they have to do is sit down and talk. The report shows that there is no equality and that Israel is an apartheid regime.

Ali explains that you can divide the Palestinians into three groups; those given Israeli citizenship including the right to vote, Palestinians living in the Gaza Strip and the west bank under Israeli occupation and siege since 1967. They have no rights and they are stateless and Palestinian refugees living abroad who aren’t allowed to return by Israel because they are not Jewish. The human rights report shows how Israel practices discrimination apartheid against all three groups. 20% of Palestinians have the right to vote but they still have second class citizenship. There are 65 laws that discriminate against Palestinian citizens e.g. land use laws, social economic inequality. The bigger context is that under Israeli control there are 6.8 million Israeli Jews and 6.8 million Palestinian, the later have limited rights.

There are many similarities between what’s happening in Palestine and what happened during South African apartheid. Israeli is a 21st century apartheid utilizing technology to entrench this apartheid system. One recent example is the roll out of the vaccine to Israeli citizens vs Palestinians. The Palestinian authorities cannot do anything without the permission of the Israeli state. Israel was actually willing to export vaccines to countries such as Guatemala for recognizing Jerusalem as the capital of Israel instead of vaccinating millions of Palestinians at home.

Examples of dual systems between Palestinians and Israeli citizens. The West Bank has been militarily occupied by Israel, forcibly taking the land, ethnic cleansing occurring overtime. They make it impossible for Palestinians to farm, banning them from digging a well on their own land, not allowing them to collect rainwater, destroying rainwater collection systems that Palestinians have built. The Palestinians would have to buy back their own water from the Israelis. Another example is they demolish buildings with the excuse that they were built without permits. But these permits are only given to these Israeli citizens. This means that Palestinians are forced to build ‘illegally’, giving the excuse for Israelis to destroy these homes. The dual roads that separate Jewish settlers and Palestinians, for example, to get from Bethlehem to Ramallah is a 20-minute drive versus several hours for a Palestinian. The short routes are banned and only used by Jewish settlers.  This is the reality of Apartheid in Palestine.

Ali talks with Samar and Ahmed about Sheikh Jarrah and the Human Rights Watch report. The area is being systematically erased by Israel. Silwan is also another area in East Jerusalem where Palestinians have been expelled from and is being turned into a Jewish only Disneyland. What the tourists don't see is the brutal violence that has led to the things they experience in Jerusalem. It becomes very difficult to negotiate with someone who has bulldozed your home.

Ali talks about the report and how effective it’s going to be. Will they stop turning a blind eye to what’s happening? It’s politically costly in the US for a politician to come out and say Israel is an Apartheid state and that funding them should stop. Some of this is changing in the US and Europe by grassroots movements but they’re still not significant enough. However, there are laws in 25 states which aim to restrict and punish people or companies that are complicit in Israel crime. To conclude the report is useless unless there is a grassroots movement that wants to create actual change.

Ali talks to Samar and Ahmed about a One State Solution versus Two State Solution. Ali believes that the two-state solution is Israel just continuing to implement their Apartheid system. There is always resistance to justice, because it means that some people will have to give up their power and privilege. Propaganda teaches Israelis to fear Palestinians, it portrays them as barbaric. There is fear of transformational change. In the US people are on the side of Apartheid so is the politics. In order to create actual change people need to start asking members of congress for change.