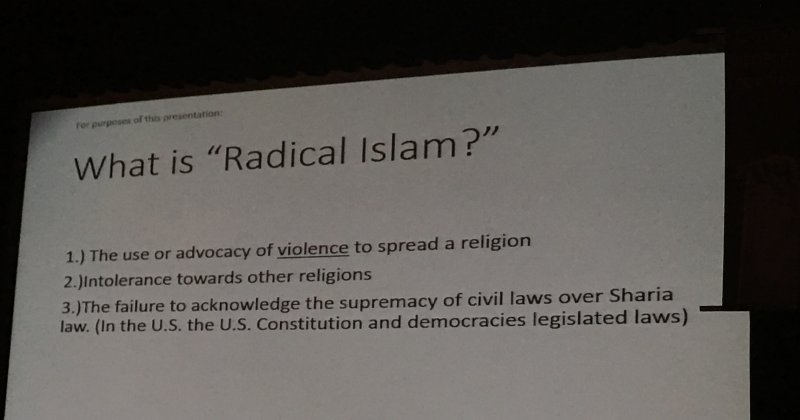 I attended a lecture with the title of “The History of ISIS, al-Qaida and Radical Islam” given by the Charlotte County supervisor of elections. I was not prepared for what followed.

Several Muslims and I sat listening while we were “informed” about Islam and what our faith entailed.

Of course, there were the usual images of deserts and camels. A portrait of a man came on the screen and we were told that this is Muhammad, though generally Muslims do not have pictorial depictions of God, angels or prophets. And this person was also depicted as a warrior on a horse. Incidentally, not once was the Prophet accorded the respect of the title.

Explaining the spread of Islam through conquest and trade, the supervisor wondered at the speed with which Islam has spread.

“Imagine,” said the supervisor, “their faith is so deep they pray five times a day while prostratingthemselves.” So? How is this relevant to voter education?

Should praying five times a day affect voting? If you had not attended a class on Islam 101, and your knowledge and information had thus far been confined to TV news and anti-Muslim emails, you would have come out of this lecture none the wiser. Due to many errors of omission of historical facts when giving such a lecture, it came across that Islam is not part of the Abrahamic tradition and is not related to Judaism and Christianity.

A slide was shown on the “Pre-Iraq Invasion by the U.S., the Iran/Iraq War 1980-1988” without any geo-political context. The supervisor explained the whole affair in terms of the Sunni-Shiite divide.

The supervisor thenshowed many slides of Iraq and said, “Iraq was really never a country,” that the country had always been divided along Sunni-Shiite geographic areas, with the Kurds in inaccessible mountains where neither group could get rid of them. He added that the Iraq of today is really an artificial creation of the French and the British.

So? Relevance? Will we be voting any time soon on a referendum on the division of Iraq along sectarian lines?

Suddenly, al-Qaida appeared somewhere in this mix. No explanation of the “history” of its founding in Afghanistan in the context of the Cold War, the Soviet invasion of Afghanistan or of the U.S. arming and funding the Mujahideen, which then morphed into the Taliban and al-Qaida.

ISIS also suddenly appeared without any “history” of the political context, such as the 2003 invasion of Iraq, which effectively managed to destroy that nation state. The supervisor talked of the founder of ISIS having been vetted while in U.S. custody. Nomention of the fact that neither al-Qaida nor ISIS existed in Iraq before the U.S. invasion.

A slide showing mosques across the U.S.

seemed to elicit gasps from the audience, while we also saw a picture of closed-off streets with a large group of men prostrated and praying on the street.

It was not made clear that that picture was of a permitted event on a certain day, and not the norm. Insinuating that our numbers are, apparently, increasing through immigration, not once did the supervisor mention U.S.-born Muslims, and also that many American Muslims are African-American and/or converts.

Then came the subject of radical Islam, explained in a singleslide as, “The use or advocacy of violence to spread a religion.” This is unacceptable in Islam. “Intolerance toward other religions.” This is again false.

And the most egregious message of this lecture by this elected supervisor was to say that “the failure to acknowledge the supremacy of civil law over Sharia law” is something “American Muslims need to face and deal with.”

It’s actually a Muslim’s religious duty to follow the laws of the land where he or she lives.

To suggest the very opposite questions our loyalty as citizens. Does it mean, then, that we Muslim-Americans are not considered full citizens until we somehow identify ourselves by wearing a badge or asign around our necks, to show our allegiance and our loyalty to the U.S. Constitution and to the law of the land?

Again, the relevance to voter education?

The inaccuracies we endured for two hours are too many to mention in one article. It would have been more educational and informative to have included a Muslim scholar on the subject to educate the voters.

So just imagine that you were in the Cultural Center for two and half hours, with a full house of a few hundred people, being told who you are and what you believe in, and what you need to do to be accepted.

Imagine, also, the presence of fully armed law enforcement personnel wearing bulletproof vests, armed men and women in civilian clothes in the hall and you ask yourself: Is this supposed to make me feel safer, or more afraid?