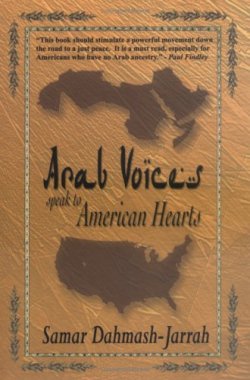 In the aftermath of the tragedy of 9/11, journalist, teacher, and peace advocate Samar Jarrah found herself called upon by her small Florida community, as well as impelled from within, to dispel stereotypes of Arabs and Muslims. After three years of speaking to audiences of up to 800 Americansin churches, at events of professional associations and other organizations, and at peace rallies, Ms. Jarrah had a vision. If governments would do nothing to combat misunderstanding between Americans and Arabs, then she would open a direct dialogue between these peoples.

Thus, Arab Voices Speak to American Hearts was conceived. But how? A second inspiration prompted Ms. Jarrah to email a great variety of friends, family, and professional contacts in the U.S. and assemble over 100 questions that Americans wanted to ask Arabs and Muslims. A naturalized American citizen herself since 1994, Jarrah then spent the month of October 2004 in Egypt, Jordan, and Kuwait asking these questions.

The remarkable result is found in these pages. Important themes recur throughout the 12 interviews. First, most of those interviewed liked Americanssome even had relatives married to Americans. Many of those interviewed had studied in America and admired Americans as a friendly and enterprising people. Most of these also admired the American form of government.

Yet nearly all of the interviewees disliked current American polices toward the Middle East, especially those of the Bush administration, as well as long-standing American foreign policy toward the problem of Palestine. These two issues, along with the Iraqi war, mostly angered the Arab men and women interviewed. Yet, viewpoints varied. Some thought that American efforts to bring democracy to the Middle East were good, while others said that democracy in Arab countries could only come from within. Some thought that American troops should remain in Iraq and some did not. One theme flows throughout the bookall those interviewed were delighted to be asked to describe their lives and views to Americansand to ask similar questions of Americans.

Thus, Arab Voices Speak to American Hearts provides a cross-section of Arab society in thoughtas well as in gender, age, and even religion. Of the 4 women and 8 men who speak in the book, ages range from 19 to 66, and 9 are Muslim and 3 Christian. The interviews were conducted randomly. All but one are "average" peopleordinary citizens of their countries, although most are well-educated. One is a well-known woman film director Jarrah's follow-up to Arab Voices Speak will be a book based on the questions that her Arabic interviewees and others in the Arab world wanted to ask the American people directly. Ms. Jarrah also has several other books planned.

Fill your address below to proceed with payment with Paypal