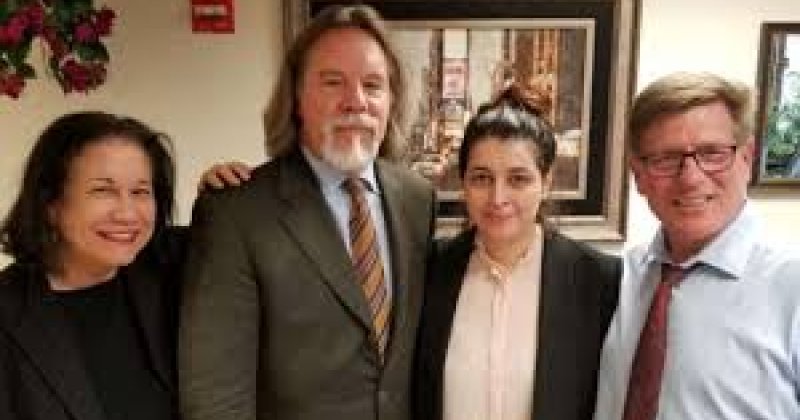 Rim Banna, Palestinian cultural icon passed away on March 24th. The singer lost her nine-year battle with cancer; she died in her hometown of Nazareth. Rim received her music education at the Higher Music Conservatory in Moscow, she returned to Palestine and began adapting traditional Palestinian children’s songs and poems into modern songs. Rim’s music philosophy has preserved a piece of Palestinian cultural and national history, her national and international success ensured it would not be forgotten.

In this weeks show Samar was live for the verdict announcement in the Noor Salman trial.

Noor was being charged with obstruction of justice and aiding and abetting Omar Mateen, her husband who tragically shot down 49 people and injured 53 at gay nightclub Pulse in Orlando, Florida on June 12th 2016. Noor has been incarcerated since they day of the shooting.

Journalist Murtaza Mohammad Hussain weighed in on the subject in the final moments of the trial. In looking closely at the trial we learned that Omar Mateen’s father worked as an FBI informant for 11 years. In addition the FBI investigated Omar in 2013 for talking about weapons at this workplace, and the man investigating this claim tried to recruit him. Could this be a cover-up for a reason as simple as Omar outsmarting the FBI, or the FBI mishandling him, Samar asks. Murtaza shares with us a number of ways in which the FBI hid and skewed the facts, telling us it is very possible the FBI closed its investigations on Omar due to his fathers connection with the Bureau.

Omar was claimed to have given a motive during his last moments alive, he wanted the US to stop bombing Syria and Iraq. Initial news reports claimed he himself was homosexual. The mistruths about the jailed new mother, her deceased husband and the FBI would unravel in the trial.

The difficult trial unfolded over a month, and the jury was split between 5 men, 7 women and 6 alternates. It took them 2 days of deliberations and sifting through evidence before they reached a verdict for the two charges.

The picture the world would see of Noor would change drastically over the span of the trial; she suffered physical, mental and emotional abuse at the hands of her husband. She was an isolated woman who did not have access to her husbands’ personal life, Omar engaged with other women and activities during their marriage and browsed websites Noor could not have known of.

It was essentially inconsistencies in the FBI’s evidence and testimonies that allowed for Noor’s pro-bono lawyers to prove her innocence, Noor was found not guilty of both charges.

The mood inside the courtroom during the verdict reading was one of silence, until Noor’s family and attorneys started cheering and crying, followed by Noor’s happiness and sobbing. Members of the victims’ families were quiet and did not show any reaction.

Samar’s comments echoed those of all who have watched the case unfold; this was an example of how the judicial system protects its citizens, and gives them the right to a fair trial.

Touching comments from her team of lawyers and family followed shortly outside the courtroom as they began addressing the press, who had no access inside the courtroom. Her uncle shared the first thing they were going to do when she went home;

Hire the best therapist, I don’t know how she will make up for the last two years, she is going back to her son.

Listen to the full story here

This show featured the song Sara by Rim Banna.